Menu
Log in
Register
Install the app
You are using an out of date browser. It may not display this or other websites correctly.
You should upgrade or use an alternative browser.

Server Owner
Below are the most noteworthy changes done to the C++ gamemode. Bear in mind this is not every change, but the most important ones that you'll notice after the switch. You're bound to find improvements and changes in every corner.

• NEW shooter minigame. It is round-based and involves shooting rocket projectiles at other vehicles to destroy them and the last remaining player wins. Players use LMB to fire the projectile and we utilize range detection to determine where to move and explode the object in GTA terms. The upside of this solution is that we avoid the bulky ColAndreas dependency while providing effective vehicle to vehicle collisions with a projectile object. The downside is that we do not have projectile collisions to objects. Additionally, players can use H (KEY_CROUCH) every three seconds to bounce at a limited height to evade rockets. Play now: /shooter
• Redesigned the entering of properties to use pickups. The days of having to /enter, or /exit a property are over! In addition, there is an efficiency gain here also.
• Added ability for race builders to: toggle object streaming, toggle collisions, and set a desired vehicle model. Incidentally, regular players can submit races as well (this is not new, but worth mentioning).
• Derby now supports spectating active players in the round.
• Renewed VIP system. It is now subscription based. As before, majority of the bonus features can be earned with online time. See more: /donate
• Implement anti-advertisement check for chat and private messages. To detect them, we are using regular expressions! This will not entirely prevent advertisements but it will prevent input such as: "join my server 127.0.0.1", "127.0.0.1:7777".
• Added new achievement 'Leprechaun' - Find five goldpots in a row.
• Add new achievement 'Escape Artist' - escape from 100 mazes.
• Added in-game race record viewer: /racerecords.
• House car options are now included in /myhouse and this provides a more interactive interface. The old commands are still usable.
• Implemented ingame custom weaponset management (/weaponset) and made it a bit more user-friendly.
• Gungame has a new arena.
• Removed armor in deathmatches and in general.
• Include vehicle addons preferences to the /settings dialog.
• Revamped /cmds dialog. It is much more user-friendly!
• New /irc command to see users in our channel.
• Begin work on a cops and robbers minigame. It is not yet complete, but I want you guys to know I'm working on it.
• Improved /reports system for staff. The last 100 reports are shown, and reports regarding a specific player can be gleaned by /reports <id/name>.
• Add /selvehicle and /selskin for visual vehicle spawning and skin selection lists respectively.
• Finalized the /races dialog. This makes the management of races considerably easier for staff.
• Introducing comprehensive /getinfo function for staff. This is a one stop shop for user information, such as recent activity, ban history (/prevbans), namechanges, and more.
• House owners can now purchase furniture objects to decorate their interiors. Objects can be added or altered via the /myhouse menu. There is a limit of 25 objects per house, but this could change.
• Improved aspects of UI throughout the gamemode.
• Allow players to use animations in fallout. This has the dual effect of bringing attention to the animations we offer, and in making fallout more appealing. Suggested by Akira.
• Move position of fallout information textdraw (which shows the remaining blocks and reward). It was obstructed by the action log TD
• House costs are now in format 1,000,000 for readability
• NEW dueling system. Through /duel, one can set up a duel with a player of their choosing and configure starting health, playing arena, and the weapons used. Alternatively, one can use /duel <player/id> to hasten the setup process. In which case, the most commonly used weapons are given.
In addition, the /duel menu provides options to bet on duels, spectate duelers, and see upcoming/ongoing duels. Finally, the system supports multiple duels, no more waiting, yay!
• NEW team deathmatch minigame. The minigame is set in the military base at the outskirts of Las Venturas. Teams are currently called red and blue. For a round to begin, each team must
have three players in it. Each round lasts 10 minutes and the team with the most kills (indicated by a textdraw) wins the round.
• NEW gang system. Accessed through /gang it offers every option available for members such as creating/joining a gang, inviting players, the member list, statistics, setting up gang wars, managing gang-owned businesses, AND MORE!
• NEW maze minigame. This is not technically new as it was present in the PAWN gamemode. However, internally it operates a bit more efficiently (generates a maze and shows in 2ms), and behaves a tad differently than its predecessor.
• Gang rank system - ranks are entirely custom and special permissions can be given.
• Revamped gang-war system. It actually works now (unlike in PAWN) and multiple gangwars can run at once.
• Gang-owned businesses. It is controlled through the gangs dialog, and it behaves similarly to player-owned gangs. Through the dialog, gang members with permission can buy/sell gang-owned businesses. All gang members can see the progress of the businesses as well.
• Gang invitations are now saved (they do not need to be responded to immediately as it was in PAWN), and players can have multiple invites from different gangs. They can be declined as well.
• Update streamer library to v2.8.2. I have modified the source for performance benefit and you should surely be able to tell by the object streaming quality!

• Fix race positions textdraw not displaying the correct percentage from the second to last CP, as reported by Tezla.
• Players can no longer use quick entering on locked vehicles
• Fix players being able to use /objects in a race.
• Users can no longer embed colors to custom labels using braces.
• Resolve issue where players who joined and did not spawn were given achievements
• Fix /textlabels not toggling.
• Fix glitch in our registration dialog/process that would show the name of the account the player failed to login into after they provided a new name.
• Fix goldpot pickup not being destroyed properly.
• Optimized timers for certain minigames. They no longer run constantly and wait for events.
• Fix small issue in racepositions textdraw display
• Houses with invalid interiors can no longer be purchased (Thanks Madvillayo)
• Teleport reactiontest properly now give 2 XP on winning
• Fix broken query for ban information dialog (/baninfo).
• Fixed passengers teleporting and taking a vehicle that doesn't belong to them.
• Teleporting players on foot or in a vehicle, no longer teleport DIRECTLY on the teleportee inhibiting movement for both.
• Fixed issue where players with house spawning enabled were not considered in their house after spawning.
• Resolve rainbow colors and random colors not being applied correctly
• Remove pesky vehicles near /DAM. Remnants from an oooooold map I presume.
• Fix fighting style instructions message (wrong key was displayed)
• Fix bug where the race time gametext was not shown properly
• Fix superman being activated while aiming
• Probably fix issues that arose if a dueler is killed without a reason (or a killer).
• Fix bug where some minigame participants would not be properly respawned if they went AFK.
• Races that require objects to be erased for the player now destroys visible objects.
• Fix duel map objects not being shown to duelers who had previously disabled objects.
• Fix /textlabels not toggling.
• Properly handle returning to the settings menu/closing the dialog with the /label dialog.
• Fix players in a goods delivery mission not being able to spawn a vehicle. However, they can't when they pick up the truck and trailer.
• Fix players being able to use /objects in a race.
• Fix players being able to /ignore themselves.

Head Admin
VIP
A great achievement for SF-SE, being part of the community since 2011, through the closures and re-openings. It’s great to see us using a gamemode that can be improved on a lot more
Last edited by a moderator: Dec 30, 2017

still there is some issues need to be fixed

for example there is no house to buy!!!

Black_ouT said:
great work u have done guys
i`m so happy with this improvements

still there is some issues need to be fixed

for example there is no house to buy!!!

I restarted the server a few times during the night for some quick fixes. Sorry about that!

was it because of fixes?

well tnx for all works u done xD

3-can use guns in g zones 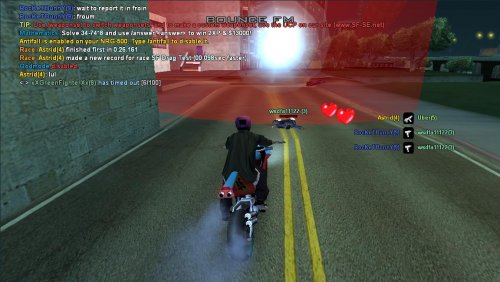 Server Owner
Cars can be rammed if the given race allows it. There is a setting. What are g zones?

cawfee said:
Cars can be rammed if the given race allows it. There is a setting. What are g zones?

Wow,seems like some great effort has been put into this changelog. Good job cawfee!

Spawn zones will be added.

Confirmed, we will fix this.

Please keep the feedback coming! We appreciate any and all bug reports and suggestions!

I'd like to add one thing, though. You probably made a few typos in the changelog:


cawfee said:
Gang-owned businesses. It is controlled through the gangs dialog, and it behaves similarly to player-owned gangs.
Click to expand...

I assume it's supposed to be "it behaves similarly to player-owned businesses".

This is listed twice. Near the beginning and end of the fixes list.

Sulps said:
I assume it's supposed to be "it behaves similarly to player-owned businesses".
Click to expand...

Not sure, I'll let cawfee answer that one.


Sulps said:
This is listed twice. Near the beginning and end of the fixes list.
Click to expand...