Menu
Log in
Register
Install the app
You are using an out of date browser. It may not display this or other websites correctly.
You should upgrade or use an alternative browser.

We're pleased to announce some amazing news - we've updated both our website AND gamemode! Take a look below!

A big thanks to everyone who worked hard on this update, including @Kostas, @Luis and @madvillayo

New UI (User Interface)
Welcome to what is my proudest piece of work, the new user interface. This has to be done due to the fact the old style was way outdated after much talk with @Kostas, @bear & @Silent we finally came to the conclusion of making
use of Bootstrap which is VERY good to work with. The back end is all the same as of now but the front end is completely new & re-written with two different styles, light mode & dark mode!

I feel it's a lot more reponsive, as it should be and also works a lot better on mobile devices with Bootstraps amazing reponsive cababilities it detects how big your screen is and automatically sets the correct width for you.

With that said, I genuinly hope you enjoy this because it was a pain to get correct I do appreciate feedback but if it's saying "go back to the old design", the answer is no mainly because as I said earlier it's outdated compared to other websites.

With the new design comes a new carousel (image slider), instead of the background system I've decided to add in this carousel of some awesome SF-SE images, the majority of them are @madvillayo's work so immense thanks goes to him!

[Christmas]
- Santa is back! He's left 50 gifts all over the map. Unwrap all of them and you'll be rewarded with a sum of cash and EXP
- Say hello to the white stuff with the /snow command
- Make yourself look Christmassy with a /santahat
- Get yourself frozen with a /snowball fight
- Added the /xmas map, by @madvillayo
- Updated the look and feel of /sf for Christmas! Thanks to @breyt

[Teleports]
- Renamed /tr1 to /tr since /tr1 doesn't exist anymore.
- Renamed Bay Side to Bayside (requested by Madvillayo).
- Set camera behind player when teleporting with vehicle.
- Display "Back" button if redirected from /teles commands otherwise "Close" if command /challenges or /dm were executed.

[Derby]
- Fixed bug with not always detecting vehicle in water

[Capture the Flag]
- Added hydraulics to vehicles by default (suggested by @vodka)
- Reduced flag respawn time from 60 to 30 seconds
- Added a new map - Everland, by @madvillayo

Head Admin
VIP
Any issues found with the site, could you please post a bug report in the bugs section

Luis said:
Any issues found with the site, could you please post a bug report in the bugs section
Click to expand...

Does the website look like this for everyone or is it just me? I had to type sf-se.net/forum to get to the forum 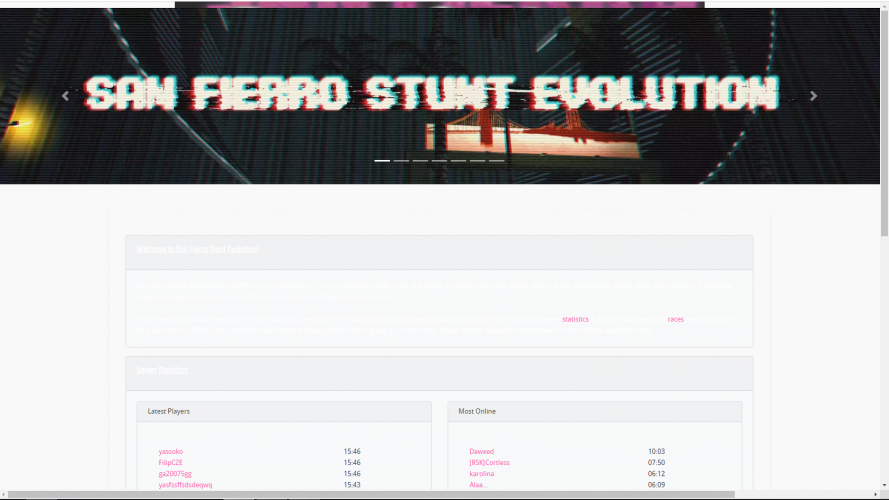 hmmmm sure thing this will be good

I cannot begin to describe the elation i felt because a picture i edited made the rotation of pics on the landing page of the website. I am truly honored.

Bandit said:
I cannot begin to describe the elation i felt because a picture i edited made the rotation of pics on the landing page of the website. I am truly honored.

Head Admin
and i oop

I'd like to add to this, I wasn't going to remove it, but if others felt it wasn't good enough. I don't mind it staying at all.